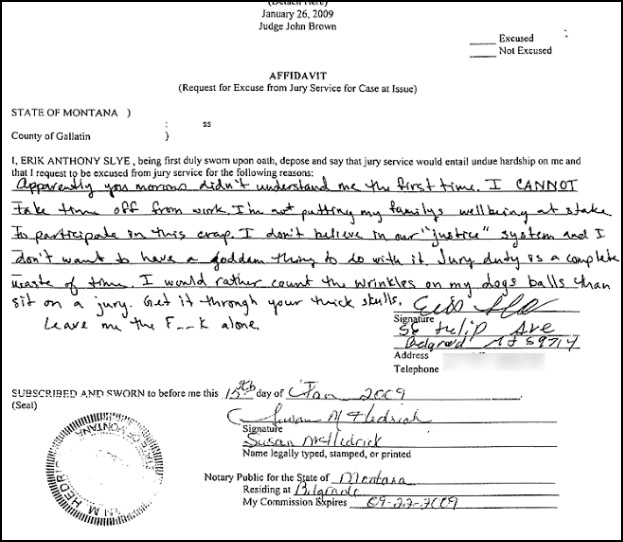 Over my 20 years of experience, the question I get most often when I tell people that I am a jury consultant is: “What should someone do to get out of jury duty?”

As the director of JuryTrialConsultants.com I have consulted with lawyers on and participated in jury selection in hundreds of cases across the country. I have heard many desperate attempts.   Most attempts to avoid jury service are transparent and unsuccessful, with some leading to public embarrassment or even a judge’s wrath.  This brief article will cover qualifications, disqualifications and a few misguided techniques that are sure to lead to trouble.

Jury service plays an important role in our lives, as well as liberty and justice in America.  By putting decisions about justice and law in the hands of ordinary citizens, our American legal system helps to quell corruption that is all too common in other countries.  Nevertheless, on a personal level it can seem like a hassle when it interrupts our daily schedules.

Qualifying/Disqualifying factors for Federal Court (District Court) are standardized throughout the United States:

State Court (e.g., Circuit Court, Court of Common Pleas, etc.) follows these same criteria but apply the residential boundary to the respective county, rather than the district which includes several individual counties.  Additionally, State Court exclusion criteria vary considerably across venues and states.  For example, many courts vary in maximum age exclusions or limits on the number of years between required jury service participation.

Some states will excuse full-time students or teachers during the school year.  However, in many areas this is left up to the discretion of the trial judge.

A small percentage of people are naïve enough to believe they can simply ignore, disregard or throw away a jury service summons and claim they never got it.  Judges often issue arrest warrants and hold people in contempt of court for not showing up for jury duty, so any summons should be taken seriously.

In rare instances, the court will make an error and send a summons to ineligible people but this still requires attention of the recipient.  Jury Duty Summonses are drawn from either voter registration or driver’s license databases in each venue.  Sometimes errors in the database or errors in assessing eligibility arise but these are relatively rare and easy to resolve.  There have been instances of foreign citizens, children and the deceased receiving jury service notices but occurrences are relatively low compared to most clerical errors.

Most courts will allow people who have been summoned for jury duty to postpone jury service one-time based on a loose range of reasons.  Then you are automatically placed back into the pool for future jury service summons.

Most everyone believes any interruption to their lives is a hardship.  However, juror hardships are evaluated by the trial judge for each case and the acceptance of juror hardship claims varies dramatically across judges and courts.

Economic/income hardships are the default excuse for most jurors and are commonly denied in most circumstances.  Some judges will excuse small business owners who play an essential role in daily business operations or commission-only sales positions for longer trials.  However, most other jurors are commonly denied economic hardship excusal.

Primary caregiver of elderly/infirmed relative or young child hardships are often granted, but expect to be able to substantiate these claims with proof for the court.  In most cases, I have seen judges show sensitivity to prospective jurors with primary caregiver demands when there is no other person who can temporarily cover their caregiver role.

Scheduled event or trip hardships are often granted but usually only for events deemed important by the judge (e.g., funerals of relatives, weddings, graduations, etc.) or vacations where plane tickets had already been purchased.  Vacation “plans” are an excuse that is commonly denied without proof of pre-paid airfare.

You are “Picked” until you are “Struck”

Most people who go through the process of jury selection leave at the end of the day stating that they “didn’t get picked.”  However, juries are not selected – they are deselected through a process of elimination.  Most courts have a predetermined sequencing (i.e., “batting order”) that the prospective jurors fall into.  This is determined randomly by the jury pool coordinator before the judge or lawyers ever even see the jurors.  Many times prospective jurors who fall at the end of this order are simply excused because the number of available seats on the jury (6 to 12) already was filled by other people who fell earlier in the (random) order.

Once the number sequencing is set, the lawyers ask the prospective jurors questions in a process referred to as voir dire (which translates to “To speak the truth”).  The lawyers evaluate answers to these questions in decisions to eliminate (“strike”) jurors from the pool of prospective jurors.  Lawyers from both sides designate strikes in hopes of eliminating jurors who appear unfavorable to their case.  There are two types of strikes: Peremptory Strikes and Cause Strikes.

Cause Strikes are premised on a notion that the particular juror has an experience or belief that biases that person regarding some relevant issue in the trial and Cause Strike requests are assessed and decided by the judge on a case-by-case basis.  For example, any prospective juror who had a traumatic experience similar to an issue in the case might be therefore “biased” and (sensitively) “struck for cause”.

Peremptory Strikes are limited in number (usually only three per side) but are designated based on the lawyer’s discretion of which prospective jurors are likely to be most unfavorable to their respective case.  This is where lawyers make their strategic “chess moves” to eliminate the jurors they think are most likely to favor the other side.  Preemptory Strikes are designated at the last stage of jury selection before the jury is set and sworn in.

These “strikes” are how each side attempts to eliminate any pre-existing biases toward their case.  Thus, jurors are not “picked”, jurors are eliminated based on perceived unfavorable characteristics to one side, or the other.  However, jurors thought to be unfavorable for one side would be theoretically favorable for the other side.  Nevertheless, it is a process of elimination rather than inclusion.

When Being a Jerk is Against the Law

Some people attempt to get of jury duty by virtue of their discordant personality characteristics.  However, being an outcast is no guarantee of getting early release from your civic duty.  In most cases, even those people who are cast off are kept for the entire selection process.  Moreover, when these actions occur in a courtroom they can be deemed as perjury and have severe legal consequences.  The following are real examples of people who tried to get out of jury duty and suffered the consequences.

Not Taking it Seriously
In 2006, Benjamin Ratliffe of Columbus, Ohio was summoned for jury duty on a murder trial.  Ratliffe filled out the jury questionnaire reporting that that he was “bad jonesin’ for heroin” and regarding experience with firearms, he responded, “Yes. I killed someone with it, of course.”  Ratliffe was given 24 hours in jail for obstruction of justice before he finally agreed to apologize to the judge.

Trying to Sneak Out
In 2009, Grant Faber of Oregon became “extremely bored” after half a day and just left because he “just couldn’t take it anymore.”  The Judge was not sympathetic and she issued a bench warrant and Faber got a free return trip in the back of a cop car.

No-Show with a Profanity-laced RSVP
Timothy Michael Jones of Arizona returned his jury duty summons complete with obscene language and then failed to appear.  Yuma County Superior Court Judge Andrew Gould promptly ordered Jones to appear and explain himself.  Doubling-down on his disregard for authority, Jones failed to show up. Judge Gould then issued Jones an arrest warrant with a charge of criminal contempt.

Being a Liar, Racist, or Homophobe (or all of the above)
In 2007, Daniel Ellis of Cape Cod, Massachusetts reported on his jury questionnaire that he didn’t like blacks or homosexuals.  When questioned about his disclosures by Superior Court Judge Gary Nickerson Ellis stated that he was racist and added “I’m frequently found to be a liar, too. I can’t really help it.”  Judge Nickerson asked him if he was lying now.  Ellis said, “I don’t know, I might be.”  The Judge concluded, “I have the distinct impression that you’re intentionally trying to avoid jury service.” Perhaps confused by his own character, Ellis replied, “That’s true.”  Judge Nickerson promptly ordered Ellis taken into custody.

Faking Crazy
In 2011, Susan Cole of Denver, Colorado hair stylist showed up for jury duty looking disheveled with curlers, smeared make-up, reindeer socks (in June) and mismatched shoes.  Ms. Cole was initially excused but couldn’t resist bragging about it on talk radio.  District Court Judge Anne Mansfield listens to the radio and remembered Ms. Cole’s goofy persona and had detectives track her down.  The beautician’s own reverse makeover won her a court-date.  Judge Mansfield charged Cole with felony perjury and two years of probation.

Being Disobedient and Disrespectful (with a fascination for canine testicles)
In 2009, Erik Anthony Slye of Belgrade, Montana boldly leaps across the line of good judgment by responding to his jury duty summons with an officially notarized affidavit (pictured).  Mr. Slye asserted to the “morons” at the court that he “CANNOT take time” for “this crap” [mandatory jury duty], doesn’t “believe in our ‘justice’ system”, and doesn’t want “a goddam thing to do with it”.  Further Mr. Slye insists that he “would rather count the wrinkles on his dog’s balls than sit on a jury” and demands that the court subsequently leave [him] the F**K alone.” Interestingly, Mr. Syle’s wife later reported that she was the author.  Nonetheless, Judge John Brown threatened a jail sentence until Mr. Slye appeared before him with a new-found sincerity and heartfelt apology for the judge and the courtroom clerks and staff.

Jury Duty, Liberty and Justice For All

Our country is less susceptible to the pervasive corruption and unfairness found in other countries precisely because of our constitutional rights like the right to a “jury of our peers.”  We should not take this civic duty lightly anymore than we would want others to take standing in our judgment lightly.  Jury duty is both a right and a responsibility.  After all, the vast majority of those citizens who do participate in jury duty find that, in hindsight, the interruption to their daily lives was ultimately an interesting experience.

Dr. James Wright a Jury Trial Consultant with a Ph.D. in Consumer Psychology and is the owner of the most expansive, premier domain network in the international legal industry.

Dr. Wright believes that people should have the right to find attorneys, lawyers, advocates, solicitors or law firms across the world. James is working hard to ensure that there is justice for all.